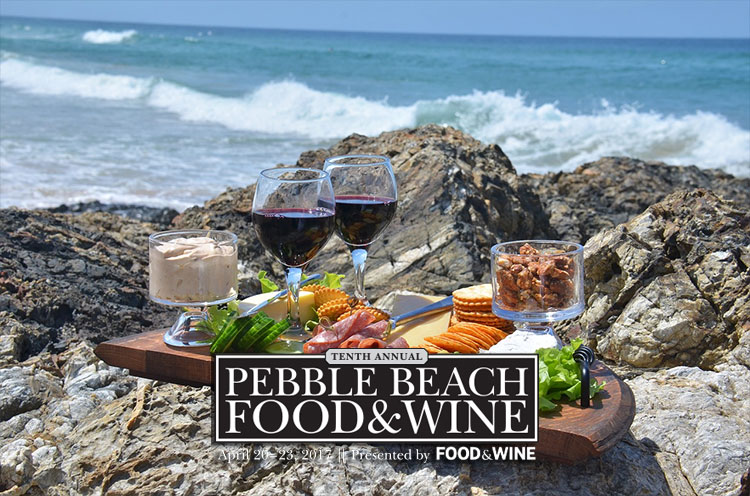 Food and wine special events are becoming more and more popular worldwide, but you’ll find the best selections each year in the U.S. One culinary festival gaining top marks is the Monterey Peninsula’s very own Pebble Beach Food & Wine Festival, which is set for its 10th anniversary next month. Here is what you need to know about this now-famed event, some highlights from last year’s festival, and a sneak peak of what you can expect this year.

The Pebble Beach Food & Wine Festival began in the spring of 2008, and its reach has grown considerably over the past decade. This year, you can enjoy the festival from April 20-23, 2017, and there is simply something at the event for everyone.

While the culinary-centered events primarily take place at Pebble Beach Resorts, there are events scattered across the surrounding area. Visitors and participants can enjoy everything from wine tasting and dinners hosted by world-famous chefs to demonstrations, culinary films, and even a celebrity golf tournament.

Last year’s event was sponsored by Food & Wine Magazine, which announced record attendance numbers with more than 8,500 attendees. The 2016 Pebble Beach Food & Wine Festival showcased more than 50 events, with discussions, presentations, and dinners that focused on a variety of culinary passions. Whether your interests were intricate wine pairings or sitting down to BBQ with Guy Fieri, there was an event just for you. The festival has plans to do even more of the same this year.

Premier Events to Look Forward to at 2017’s Event

Sponsored again by Food & Wine Magazine, the 10th annual Pebble Beach Food & Wine Festival is set to kick off on Thursday, April 20th with an Opening Night Reception at the Inn at Spanish Bay. This year’s festival will feature more than 75 celebrity chefs and will have over 250 wineries assembled to bring participants a once in a lifetime culinary experience.

There will be 20 seminars over the course of the weekend dedicated specifically to wine, where you can learn such things as pairing burgers and wine to the intricacies of winemaking. There are also seminars dedicated to your favorite variety such as “The Riesling Story,” “Passionate for Pinots,” and “Bordeaux Blanc Powerhouse.” If you aren’t sure of your particular taste, the festival has several wine tasting opportunities, where you can taste wines from as many as 200 wineries at one event.

If you’re more interested in the food than the vino, there are more than 20 lunches, dinners, and food demonstrations to keep you busy. ?Attend a cooking demonstration with chefs Brian Malarkey, Graham Elliot, or Curtis Stone. Lunches and dinners are scheduled with celebrity chefs Ming Tsai and Guy Fieri, just to name a few.

If you’d like to attend one of these events, ticket prices for a single demonstration or tasting start at $100. The best deal for the Pebble Beach Food & Wine Festival can be found in the packages, where you pay a single package fee for the weekend and select among a long list of choice events, some that aren’t offered unless you are a package participant. Many of Pebble Beach’s hotels are within walking distance of the major events. Other close options include Carmel-by-the-Sea, Monterey, and Pacific Grove.